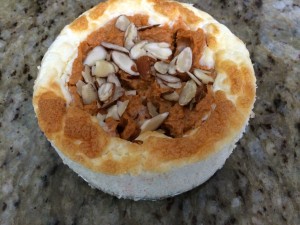 INSTRUCTIONS
Preheat oven to 375*. In a small bowl combine the crust ingredients. Spray a spring form pan with nonstick cooking spray. Press crust mixture into the bottom of the pan and bake for 10-15 minutes or until set. Set aside to cool and reduce oven temperature to 325*.
Combine 1 cup Stevia and cream cheese in a large bowl; beat with an electric mixer at medium speed until smooth. Beat in yogurt, vanilla extract and whole eggs. In a small bowl beat egg whites with an electric mixer on high until soft peaks form. Fold 4 egg whites gently into cream cheese mixture. Pour filling over the crust.
Place sweet potatoes, ¼ cup Stevia, almond milk, 1 egg white and pumpkin pie spice in a large bowl; beat with electric mixer on medium until smooth. Pour over cream cheese filling. Bake for 50 minutes or until center barely moves. Turn the oven off. Sprinkle the almonds on the top edge of the sweet potato filling. Leave the cheesecake in the closed oven for 30 minutes, with temperature off. Remove from the oven and run a knife around the edge of the cheesecake to loosen it from the pan. Cover and refrigerate for at least 8 hours. 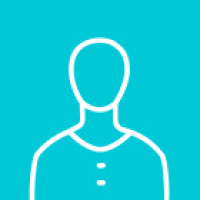 Your cart is empty.

Get Our Latest News